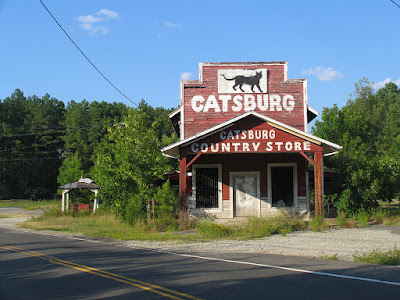 Along Old Oxford Road in Durham County sits the former Catsburg Country Store.  The store was named after former Durham County Sheriff Eugene "Cat" Belvin.  Sometime during the 1920s, Belvin built the store and a nearby ballfield.  He earned the nickname "Cat" because of his ability to catch moonshine bootleggers within the county.

On my flickr site, a commenter mentioned that the Reagan sisters ran the store into the 1970s and that later an antique store was one of the last businesses to occupy the building.  The OpenDurham blog has a photo of the store operating with gas pumps as late as 1987.
Email Post
Labels: Durham County General Stores