Robersonville is one of many towns that used to line the old road to the Outer Banks.  Before the US 64 freeway was built in stages from the 1970s into the 21st century, two lane roads carried beach traffic through towns like Spring Hope, Princeville, Bethel, Robersonville, Everetts and Williamston.

For many of these small rural Eastern North Carolina towns, the beach going traffic meant extra business and money spent in their farming and manufacturing communities.  When the freeway was built and finally bypassed the town - the beach traffic was still there but whizzed by at 55 and now over 70 miles per hour.  The impact the US 64 freeway has had on these small towns is very similar but not as romanticized as what the Interstate did to towns along US 66.

Robersonville is one of these towns.  Founded in 1872 and named after Confederate veteran Henry Robersonville, Robersonville was the first Martin County town that was not on the Roanoke River.  It depended on the railroad that runs through town and is operated by CSX today.
Robersonville is a town of about 1400 which is down from the town's peak of nearly 2000 in 1980.  Downtown Robersonville shows storefronts of what was once a very active downtown but is a silhouette of that today. 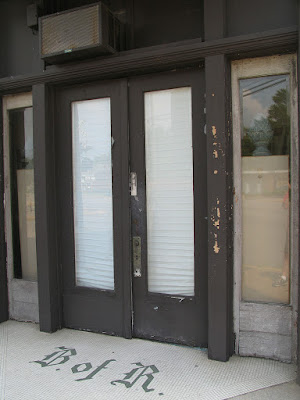 Today, Robersonville is home to the East Carolina Speedway and an over 400,000 manufacturing plant for Ann's House of Nuts.

The third Saturday of every May, the town hosts the "Music on the Corner" featuring local musicians.  Refreshments, hot dogs, and chips are only 50 cents each which makes the event very family friendly!