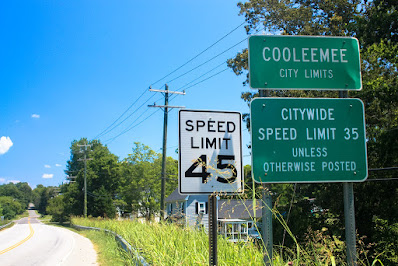 The Davie County town of Cooleemee is one of the best stories of the growth and decline of textile mill towns in North Carolina's Piedmont.  The town was home to Erwin Mills Cotton Mill #3.  Construction began on an over 1,000,000 square foot mill in 1898 and was fully operational in 1901.
As custom to company towns at the time, Erwin Mills constructed over 300 homes, a town square that was home to numerous businesses, and even a hotel near the river.  The town square over time consisted of a drug store, movie theatre, doctor's office, cafe and restaurant, doctor's offices and more.   At its peak, over 1,800 people worked at the plant, and Cooleemee - though not incorporated - was at one time the largest town in Davie County.
Cooleemee even had a minor league baseball team.   From 1937-1941, the Cooleemee Weavers/Cools/Cards played baseball in the Class D North Carolina League.  The mill had a very successful baseball team also called the Cools.
After World War II, textile mills began to consolidate or move overseas, and the Erwin Mill in Cooleemee would be impacted.  In the 1950s, Erwin originally sold controlling interest of their mills to Abney Mills of South Carolina.  In 1962, control of the mills changed hands to Burlington Industries.  In 1963, Burlington would demolish the Erwin built town square and cease operations of the plant in 1969.  A mural on some of the mills remains remembers the Old Square in Cooleemee.
Interestingly, Cooleemee did not incorporate as a town until 1985.  The town is named after the Eastern Davie County Cooleemee Plantation.  The name Cooleemee comes from the Creek Indian which means, "place where the white oak grows."
Today, Cooleemee is a town of about 960 people.  It is home to the Textile Heritage Museum which has helped to preserve and tell the story of millworker life in the early 20th century.  The Riverpark at Cooleemee Falls, locally known as the "The "Bull Hole",  is an extremely popular fishing, picnic, and swimming spot.  The park sits along the South Yadkin River.
Recently, plans to redevelop the Erwin Mills site have begun to emerge.  They vary from a new state park, redevelopment of the mill site as a destination for local retail and recreation.
All photos taken by post author - July 4, 2020 unless otherwise noted.
Sources & Links:
How To Get There:
Email Post
Labels: C Davie County