The Upstate South Carolina town of Pendleton was the centerpiece of the early history and settlement of the Upstate.  Originally home to the Cherokee, Pendleton was laid out to be the judicial seat of Pendleton County later District - South Carolina had judicial districts instead of counties from 1800 to 1868.  The Pendleton District would in time become what is today known as Anderson, Oconee, and Pickens Counties.
Pendleton is named after Judge Henry Pendleton.  He was a Virginian that fought in the Revolution and eventually settled in the area after the war.  Pendleton County was formed in 1789 and what became Pendleton began in April 1790 when the commissioners of the new Pendleton County paid five shillings to Isaac Lynch for a land track to lay out the town and build a courthouse.
Pendleton served as the judicial seat of the Pendleton District until 1826 when it was split into two districts, Anderson and Pickens.  Prior to the split, a new courthouse was commissioned and was being constructed.  The Pendleton Farmers' Society would complete the construction and the building is known as Farmers Hall.  It was in this hall in November 1861 that Thomas Green Clemson first proposed what would become Clemson University.   Farmers Hall has served many functions including the town's post office.  It is now home to the 1826 Bistro on the Green.
Downtown Pendleton remains consistent to the layout of over 200 years ago.  A large village green is the centerpiece of town.  Today, downtown Pendleton and its surroundings is part of the Pendleton Historic District.  The historic district has been listed on the National Register of Historic Places since 1970.  A key building within the district is Hunter's Store.   Hunter's Store was the typical general store of the era.  It was home to everything the town needed.  Built in 1850, the store, along with a later addition, remained in operation until 1962.
Hunter's Store now serves as the headquarters of the Pendleton District Historical District, a local research library and genealogy center, and regional visitor's center for Lake Hartwell.
Pendleton is a great downtown with a number of small businesses, specialty shops, and restaurants. 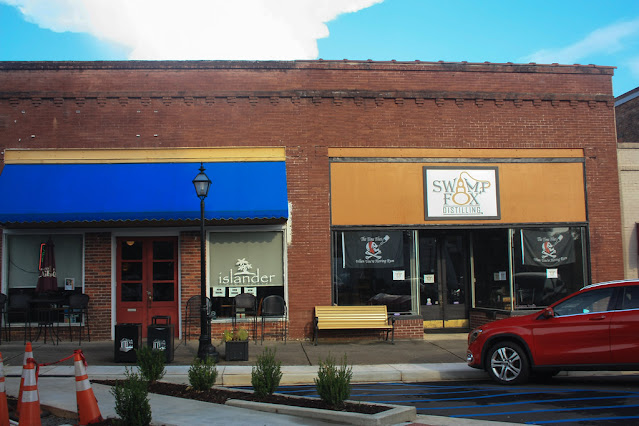