Most of the time, doing a write up for an entry on a small unincorporated community is fairly straight forward.  Take the photo, refer to the North Carolina Gazetteer, do some internet research and put together some of the history about the name of the community.  There are times where it is straightforward and nondescript; and other times where there's a little bit of history to it. 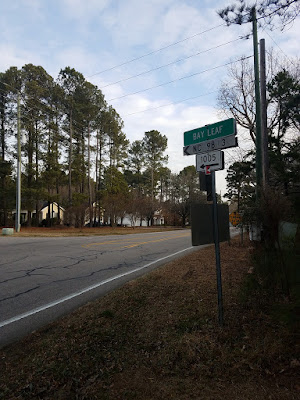 The Wake County Community of Bay Leaf would have fallen into the straightforward and nondescript category.  The Gazetter has a rather generic description of "community in n central Wake County."  However, there was one thing, in the sign photo above, it looks like Bay Leaf is two words.  When referenced in the Gazetteer, it is one word "Bayleaf".

So the question is, what is the correct spelling?  During my years living in the Raleigh area, I have seen the community's Volunteer Fire Department trucks and the trucks clearly have "Bay Leaf" as two words.  However, the nearby veterinary hospital and a local bait and tackle shop refer to it as "Bayleaf".

The Bayleaf or Bay Leaf Community sits on the south shore of Falls Lake in Northern Wake County.  The lake was created out of damming the Neuse River between 1979-1981 as part of flood control and a reservoir project for the Raleigh area.  The lake and surrounding areas are now one of the more popular recreation spots in the Triangle.


The community's name seems to be a play on the last name of "Bailey".  Though the name could also come from the bay trees that were found along the Neuse River.  As for the spelling, it appears like either way is acceptable.
Email Post
Labels: B Wake County