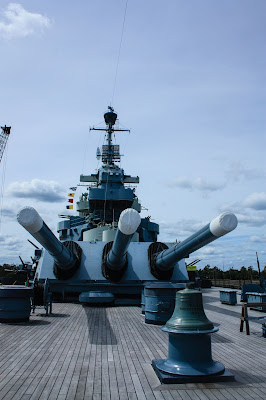 In the nearly 17 years that I have lived in North Carolina, I have always wanted to visit the Battleship USS North Carolina in Wilmington.  Even before I moved here in 2000, I had wanted to visit this historic warship.  My family typically vacationed in the Cherry Grove Beach, SC area and we always talked about driving up to Wilmington but never got further north than Calabash.  That all changed on a recent family day trip to the Wilmington area.  I have toured battleships before, but what I didn't know was the fascinating story of how a citizens campaign that saw support from the entire state saved this battleship from the scrapyard and brought her to Wilmington. 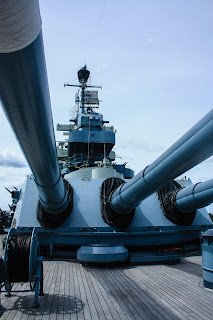 In 1920, the third USS North Carolina (BB-52) was laid down in Norfolk.  However, the 1922 Washington Naval Treaty ended construction on this new battleship and she was sold for scrap the following year.

In 1937, the USS North Carolina (BB-55) was laid down at the New York Naval Ship Yard.  After nearly three years of construction, the battleship was launched in June 1940.  The ship was commissioned in April of 1941 - eight months before Pearl Harbor.  From June of 1942 through the duration of the war, she served in the Pacific Theater earning 15 battle stars.  The battleship would be decommissioned in 1947.  The current warship to carry the North Carolina name is the SSN-777 Virginia class attack submarine.  Launched in 2007, the submarine received commission in 2008 and is currently in active service. 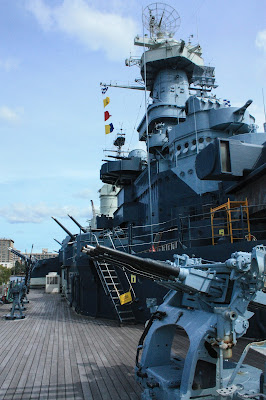 Two years after the end of World War II, the USS North Carolina would be decommissioned from active duty.  For the next ten years, the battleship sat idle in New Jersey.  When the US Navy announced plans to scrap the ship in 1958, James S. Craig of Wilmington would begin a state-wide campaign to save the ship and eventually bring it to Wilmington.  Craig's campaign, known as the "Save Our Ship" campaign, raised over $300,000 with the help of the "North Carolina Navy" a collection of citizens throughout the state and over 700,000 school-aged children, who each donated a single dime in return for free admission onto the ship. (1)

With the successful raising of funds, the North Carolina headed south from New Jersey to her new home on the Cape Fear River with the proud City of Wilmington directly across from her. The battleship arrived at her new berth in October 1961 to much celebration and fanfare.  Tragically, Mr. Craig would not be able to celebrate the success of the campaign he started only three years earlier.  Just days before the North Carolina would arrive at her new home, a tragic air accident critically injured Mr. Craig and he would pass away at an Army hospital in San Antonio on October 14, 1961. (1)


For over 50 years, the USS North Carolina has called Wilmington home and has been open for generations of families from all over to appreciate her size, power, and more importantly the over 2,300 men who served on this ship.  During World War II, the North Carolina served in the Pacific Theater and escorted numerous aircraft carriers such as the Enterprise, Saratoga and Wasp.  At the war's end, the North Carolina had only suffered the loss of ten men and saw 67 wounded. (2) 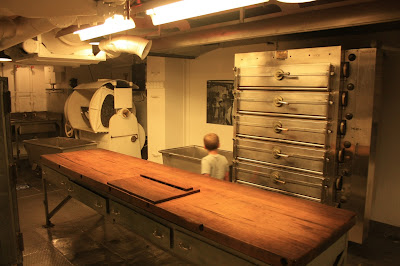 Today, the Battleship offers self-guided and three different guided tours. General admission ranges from $10 for adults, $5 for children 6-11, and children 5 and under are free.  The guided tours are at an additional cost.  There are numerous annual and special events held here.  In July 2017, the ship hosted the live theatrical performance of "Mister Roberts" on its fantail.

Allow about two to three hours for a self-guided tour.  The tour which covers below and above deck is easy to follow with the assistance of blue arrows and there are many interpretive signs and other interesting details about the ship along the tour.  Don't forget that this is a nearly 80 year old battleship and space can be quite crammed.  Stairways are narrow and steep but overall navigable. The marked tour gives options to bypass some of the more narrow areas. 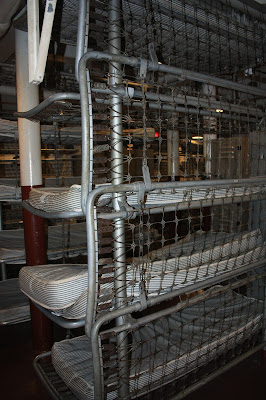 The USS North Carolina is one of the best historical attractions within the state.  Even though it took me 17 years to finally visit it, I guarantee it won't be another 17 years until the next time I go back.