For a town of just over 100 people, Seven Springs has a long and storied history.  Name changes, Civil War history, a resort community, and tragic flooding have all shaped this town known as "The Oldest Town in the County of Wayne."
Sitting on the southern banks of the Neuse River, Seven Springs is where the Confederate Ironclad CSS Neuse was built in 1863.  The Neuse was launched here and served the Confederate Navy along the Neuse River.  She had numerous troubles with crew experience - running aground not long after launch - and would later save as a floating fortification of the City of Kinston.  In March 1865, as a Union Army was closing in on Kinston, the Neuse was scuttled and set afire.  It would be raised nearly a century later, and the Neuse and her accompanying artifacts now can be toured in Kinston.
Seven Springs was originally known as Whitehall and later White Hall after the plantation of William Whitefield.  Whitefield established his plantation in 1741.  When a post office was established in 1881, the name changed to Jehrico.  13 years later, the name would change again to Seven Springs - and the name has stuck ever since.
Nearby there are seven mineral springs - hence the new name.  The mineral springs were the basis of the Seven Springs Hotel Resort.  The hotel began operation in 1881, closing in 1944.   Most of what is left of the old hotel has long been destroyed.
In recent years, the Neuse River has been very destructive to Seven Springs.  Flooding from heavy rains from various hurricanes - Floyd (1999), Matthew (2016), and Florence (2018) - has devastated the small downtown and homes nearby.  In 2021, legislation was proposed to fund the construction of a $5.2 million levee to help protect the town.  As of August 2021, House Bill 500 remains in committee.
The Neuse River can be an asset to the community - the river is a popular destination for kayaking and canoeing.  Cliffs of the Neuse State Park is also nearby.  Less than a decade ago, Seven Springs was home to two restaurants, a bakery, a bank, an outfitters store, and a local general supply.  The levee would provide greater protection to Seven Springs and allow it to thrive again. 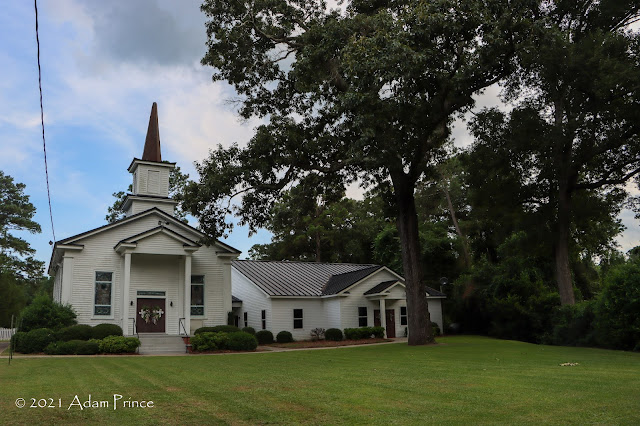 If you are ever heading south through town to the intersection with NC 55, you will see a wide staircase leading up to the top of a ridge overlooking the town.  At the top of the steps is Seven Springs United Methodist Church.  The church has been serving the community since 1866. 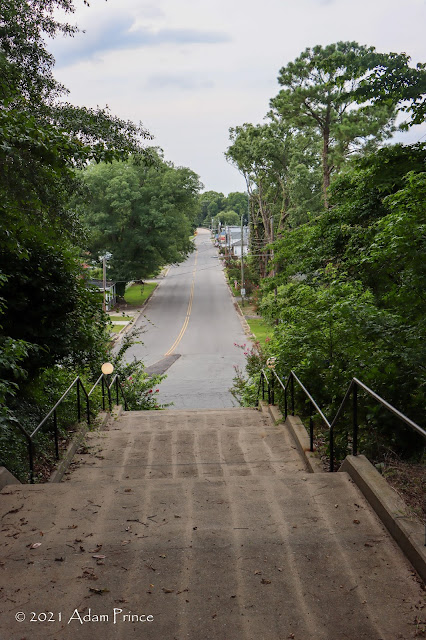 Though Seven Springs has suffered such devastation in recent years, it pushes on.  Every summer, Seven Springs hosts an "Old Timey Days" Festival and is very proud of its annual 4th of July Celebration and Christmas Parade.
All photos taken by post author - July 26, 2021, unless otherwise noted.
Sources & Links:
How To Get There:
Email Post
Labels: S Wayne County