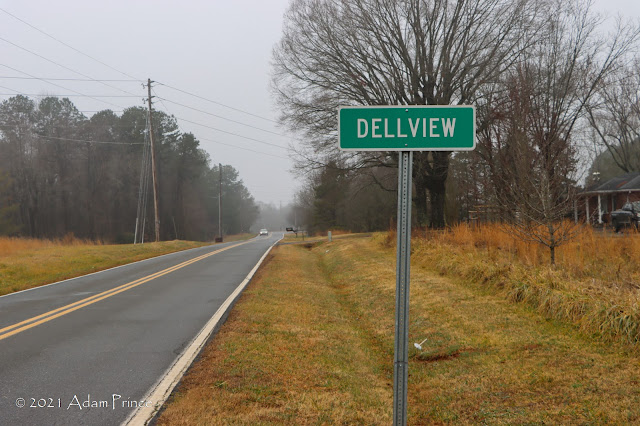 Many towns exist for various reasons. In North Carolina, many small towns exist because of a railroad - either by strategic choice or sometimes happenstance.

However, the Gaston County town of Dellview is a different story. Just to the north and west of Cherryville, the Dellinger family ran a chicken farm. But they had problems. Local dogs would run loose and terrorize and kill their chickens. At the time - the 1920s - Gaston County did not have ordinances protecting the farm from stray dogs. So one of the brothers, David, who practiced law in Cherryville and was also a member of the state legislature, came up with the solution. David recommended that they petition the state legislature to create their own town. This would allow the Dellinger's to pass an ordinance on stray dogs without impacting the entire county.

In 1925, Dellview was incorporated - named after the Dellinger family. Mrs. Tom Dellinger was the mayor; her husband, the Chief of Police. Dellinger never had a population greater than 16. And for decades, this tiny community was considered North Carolina's smallest incorporated town. In 2001, after years of inactivity beginning with the failure to respond to a US Census Bureau mapping survey in 1978, the Gaston County community was dropped from the Bureau's list of municipalities. Since then although it remains incorporated, it is inactive and just considered a part of Gaston County.
How To Find It:
Email Post
Labels: D Gaston County