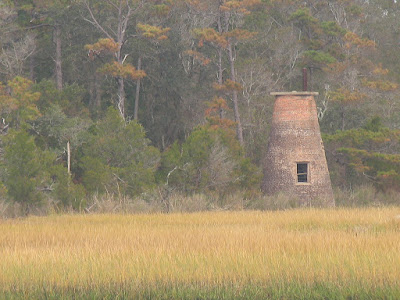 As you approach the town of Southport on the Fort Fisher - Southport Ferry, look to the right (or starboard side) and you will see a lonely brick structure that at one time stood as one of many lighthouses to help navigate the Cape Fear River.

The front range light is all that remains of the Cape Fear River navigation system of that era.  By the early 20th century, storms and vandalism had destroyed what remained of the Price Creek Rear Range light.  Fortunately, though basic in its remain the Front Range light still stands.

Today, the lighthouse sits on the property of Archer Daniels Midland and access to the lighthouse is prohibited.  As a result the only current vantage points is at either the Southport ferry landing or on the ferry itself.

Sources & Links:
Where To Find It: