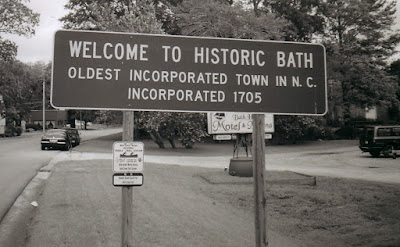 Bath - Settled in 1690 and incorporated in 1705 is the oldest incorporated town in North Carolina.  Served as the county seat from 1696 to 17985 when it moved to nearby Washington.  Bath was most likely named for Bath County - which it originally sat in.  Bath County was named in honor of John Granville, the Earl of Bath.  St. Thomas Episcopal Church, which is located within the town, was built in 1734 and is considered the oldest standing church in the state.  Both the church and the town of Bath are considered North Carolina Historical Sites.
Email Post
Labels: B Beaufort County State Historic Sites