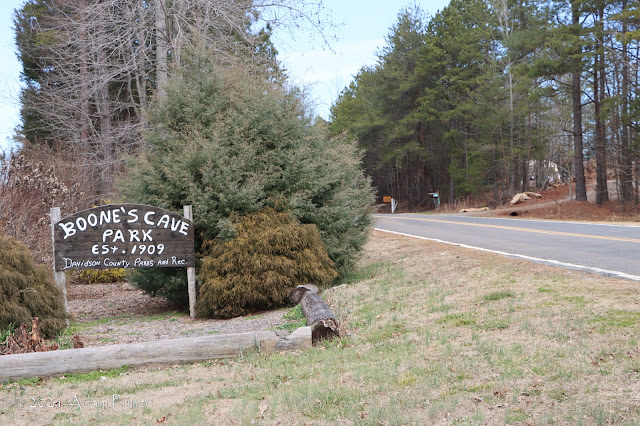 The American Frontiersman Daniel Boone is one of the most famous figures in early American History.  When Squire Boone, Daniel's father, headed south to North Carolina in 1750, Boone's influence on North Carolina would begin.

The Boone Family would settle along the Yadkin River.  Squire Boone would become a Justice of the Peace in a newly formed Rowan County in 1753.  Daniel Boone would begin defending the Western North Carolina frontier from Indian attacks.

The early years of the Boone family in North Carolina are a mystery, specifically on where they settled.

Davidson County's Boone Cave Park is considered as one of the areas where the Boone family settled.  Centuries of lure claim that the Boone's settled here along the eastern shores of the Yadkin River and utilized a small cave along the riverbank.  It is thought that the Boone's used the cave for a variety of purposes - material storage and even taking shelter inside the cave while their homestead was being built.

Unfortunately, within the park's grounds, there has not been any trace of a homestead.  No foundations or anything else that would be found in a frontier home during that time.  However, there are a few historical records - deed transfers specifically - that could show that the Boone family did settle near the park.  The Boone family would eventually settle in what is now Davie County near Mocksville later in the 1750s.
Boone's Cave Park was established in 1909 and is one of the oldest public parks in North Carolina.  The park is home to over 6 miles of hiking trails, scenic views of the Yadkin River, a disc golf course, canoe and kayak launch point, and camping.  The cave that the Boone family allegedly began their time in North Carolina is easily accessible via a boardwalk and stairway from the picnic shelter parking lot.  Boone's Cave Park is part of the Davidson County Parks and Recreation system.