One day he just felt like running.  Forrest Gump got up from the front porch of his Greenbo, Alabama home and just started to run "for no particular reason."  His journey lasted three years, two months, 14 days, and 16 hours before ending in Utah's Monument Valley.

On one of his cross-country runs, Mr. Gump, and by this time a dozen or so of his followers, ran to the top of Grandfather Mountain.  Today, about halfway up the mountain, there is a sign that reads "Forrest Gump Curve." 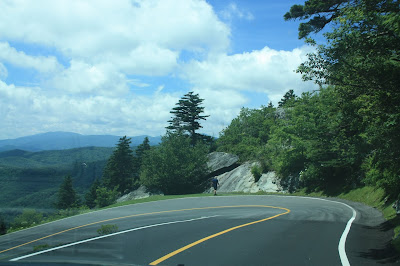 The story of Forrest's long run is one of the more memorable scenes in the 1994 movie.  There were numerous on location shots for the montage of Forrest running throughout the country and a little curve within Grandfather Mountain was one of them.

The unique story of the filming of this scene is one that is told through the "Audio Tour to the Top of Grandfather Mountain" CD that you receive as part of your admission to the park.  Filming of the scene occurred on an October Saturday in 1993.  It was believed that Tom Hanks' brother, Jim , would be the one filmed doing the running.  Jim Hanks was used as the body double for his brother Tom for most of the running scenes because it was too difficult to mimic Hanks style of running.

Unbeknownst to anyone, Tom Hanks showed up that Saturday for filming.  He had a day off - and came to North Carolina to visit with his brother.  The story goes that Tom Hanks was not even recognized by any of the Grandfather Mountain staff except to one person and that was because he introduced himself to her!

Today, the filming location is marked as you either go up or down the mountain.  Forrest Gump's curve sits just below the Cliffside Picnic Area and as you can imagine it is a very popular photo stop with visitors.  Some will even re-enact the scene.

How To Get There:
Admission to Grandfather Mountain is $22 per adult; $9 for children between 4-12; Kids 4 and under are free.