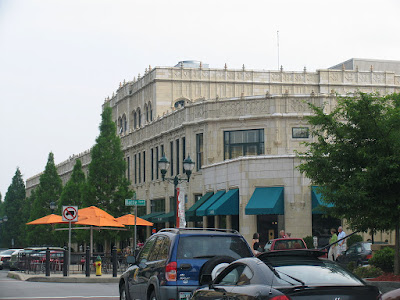 The 1920s saw numerous new buildings pop up in Asheville, as the city grew into an urban center.  Buildings like the S & W Cafeteria, the Kress Building, Asheville City Building, and others that part of the downtown's unique landscape all were completed during this time frame.  One of the most notable is the Grove Arcade which takes up a full city block between O'Henry and Page Avenues.

The Grove Arcade is the brainchild of E.W. Grove, who is the founder of the Grove Park Inn.  He wanted Asheville to have a strong and successful downtown and saw that his arcade would be one of the centerpieces of that downtown.  Grove hired local architect Charles Parker to design it.  The grand plans for the building was to have a five story base supporting a 14 story office tower.  The design would be home to shops, offices, apartments, and more. 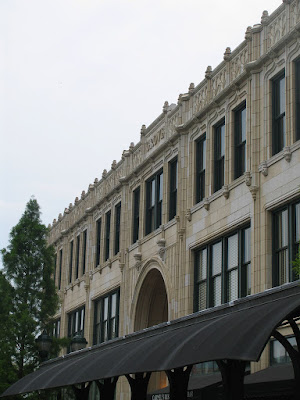 Unfortunately two events caused Grove's larger dream to not become reality.  First, Grove passed away in 1927.  After a brief pause, Walter Taylor continued with the construction of the base.  The second item that halted further construction of the building was the Great Depression.  Though the Depression halted any vertical expansion of the Arcade, inside it was one of the busiest places within the city.  As throughout the 1930s, a wide variety of shops from specialty groceries, bookstores, barber shops and more filled the first floor with offices located on the upper levels.

The 1940s saw a dramatic change to the Arcade, as part of the World War II effort, the federal government took over the building.  In one month's time, all businesses and offices were evicted.  In total, 74 businesses and 127 offices left the Arcade. (1)  After the war, the building remained under the ownership of the federal government and became home to the National Weather Record Center which would later be renamed the National Climatic Data Center.  The NCDC would be the main occupant of the Arcade until 1995. 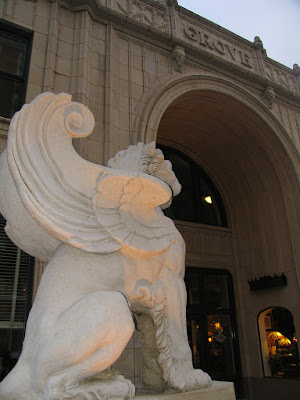 During the 1980s, while the federal government considered plans to expand and renovate the building, local citizens and leaders began to push back wishing that the Arcade retain its architectural design and return to its former use as a civic market and office complex.  In 1985, a Mayor's Task Force was formed to achieve those goals.  In time, the Grove Arcade Public Market Foundation was formed, and in 1997, the City of Asheville gained title to Grove Arcade and signed a 198 year lease with the foundation. (1)

Renovations to restore the Arcade to its original grandeur and purpose began immediately.  Five years later, in 2002, the Arcade reopened as a civic center home to numerous restaurants, shops, specialty food vendors, offices, and apartments. 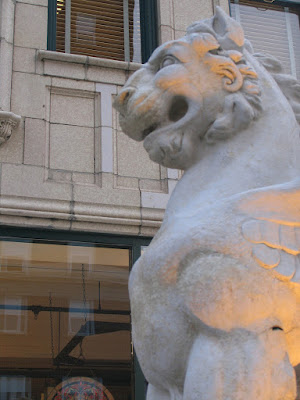 The Tudor / Late Gothic Revival building features many intricate details.  On the North end of the building, Palladin style winged lions adorn that entrance.  This grand entrance was in front of the Battery Park Hotel and was designed as such to entice tourists to visit and shop. Throughout the exterior, 88 gargoyles can be found.  Some even function as downspouts.  Located along the exterior parapet are heart shape symbols.  The Arcade was and is now considered the 'heart' of Asheville - and the heart is actually a floral symbol of an ivy leaf which was seen as a symbol of eternal love during medieval times. (2) 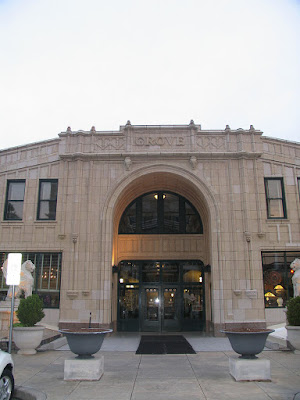 The Grove Arcade was a vibrant symbol of a growing downtown in the 1920s.  After over five decades of service to the US Government, the Arcade once again became the heart of Downtown Asheville.  Though the Arcade may not have reached its original lofty goals, the City's perseverance and dedication to return this storied building to its original grandeur allowed the Grove Arcade to not skip a beat nearly 90 years after it was first constructed.