The classic drive-in restaurant.  It's a piece of mid-20th Century America that has been slowly fading away from the landscape.  On a warm summer's night or a perfectly crisp autumn evening, it was the place to go for a bite to eat.  Pull right in, park your car, glance over the menu, press the button, and place your order through the crackling speaker.  Then enjoy the wait with your family or snuggle with your date.  Sure, there are Sonic's, but the original style drive-ins are increasingly hard to find. 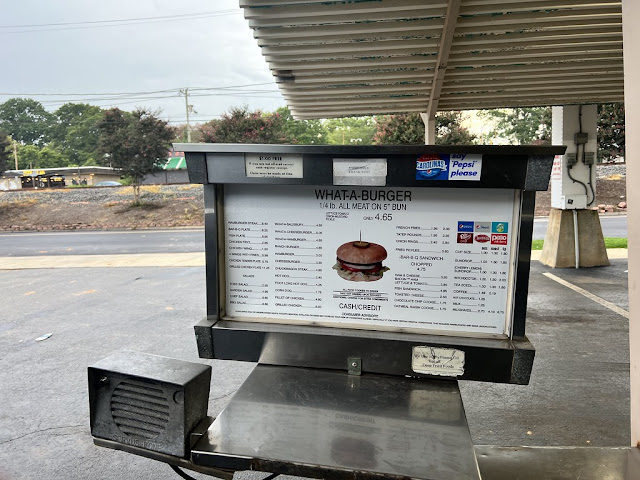 However, in the small towns and cities north of Charlotte, the classic drive-in remains strong at the local What-A-Burger.  Not to be confused with the growing Texas fast food chain, the individually numbered What-A-Burger drive-in's have been a Piedmont staple since the mid-1950s.  Owned and operated by the Bost Family - there are locations in Kannapolis, Concord, and Mooresville.  Yet another What-A-Burger, What-A-Burger 13, is owned by another group of Bosts. What-A-Burger 13 also operated a food truck.
What-A-Burger's are known locally for a few things.  First, the What-A-Burger - a 1/4 lb. burger on a 5" bun, lettuce, tomato, pickles, sliced onions, mustard - all held together by a simple toothpick.  And proudly proclaimed as "Carolina's Finest."  It can also come with cheese, the What-A-Cheeseburger.
You can get more than just a burger here. Hot dogs, pulled pork bbq sandwiches (each What-A-Burger sign includes a neon 'Pit BBQ' pig), fish or chicken sandwiches, and more are on the menu.  Of course, my personal favorite - Cherry Lemon Sun Drop - is on the soda fountain here.  Or you could try the "Witch Doctor," a peculiar concoction of all flavors at the soda fountain, pickle juice, pickles, and a lemon wedge.  Sorry, I just can't try it.
Not to be Confused with Texas (or Virginia):
The Bost family started their What-A-Burger chain in 1956.  Eventually nearly a dozen locations operated in the Central North Carolina Piedmont.  Yet around the same time, two other groups started similarly named restaurants.  In Virginia, the Branch Brothers started their own What-A-Burger chain of restaurants in 1957.  They first opened in Newport News and eventually spread into Richmond and South Carolina.
The most well-known What-A-Burger is the Whataburger franchise out of Texas.  Started in 1950 by Harmon Dobson in Corpus Christi, Texas, Whataburger is now over 800 locations throughout the Southern and Southwestern United States.  It wasn't until 1970 that either the Virginia group or Texas group knew of one another.  Thirty-five years later, the Texas and Virginia companies sued each other over copyright/trademark infringement.  The Bost families were not named in either of the lawsuits.  The Court of Appeals sided in favor of the Texas group of having the first copyright; however, the court found that since the two companies operated so far apart customers would not be confused by the name.  As a result, the ruling also allowed the Bost families to keep the What-A-Burger name.
The confusion over what What-A-Burger (or Whataburger) is which will come to North Carolina in 2023.  In September 2022, plans were submitted to open a Whataburger franchise on South Boulevard in Charlotte.  This location will be over 30 miles south of either the Concord or Mooresville What-A-Burger locations.
My opinion - unless Whataburger has Cherry Lemon Sun Drop - I'm going with Carolina's Finest.
All photos taken by post author - September 2021 and August 2022.
Sources & Links:
North Carolina What-A-Burger Locations:
Email Post
Labels: Cabarrus County Iredell County restaurants

whataburgervisit said…
whataburgervisit
Their aim goes beyond simply producing delicious food and drawing large crowds. Through their food and service, they want their customers to have a nice time without experiencing any difficulty. So they started this Whataburger Online Survey to gauge consumer happiness. Your insightful comments about Whataburger will help them understand how you feel about their offerings. Additionally, they can learn about the requirements and expectations of the customer via this survey. Your responses to the survey will never go to waste. Every customer's opinions, requirements, changes, and experiences are taken into account, and they make every attempt to meet your needs.
October 26, 2022 at 2:57 AM