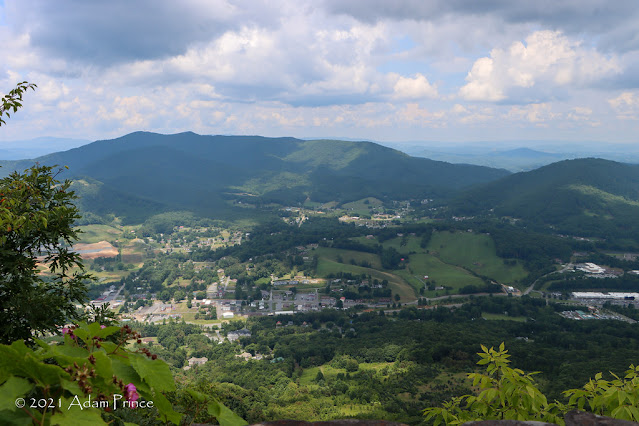 Towering 1600' over the towns of Jefferson, West Jefferson, and the Ashe County High Country that surrounds it, Mount Jefferson State Natural Area is an excellent location for hiking, birdwatching, and sightseeing. Mount Jefferson is home to over five miles of hiking trails and numerous overlooks with expansive views.

Mount Jefferson peaks at 4683' above sea level.  It did not receive its formal name until 1952.  Prior to that.  During colonial times, Mount Jefferson was known locally as Panther Mountain as a result of a legend that a panther had killed a child on the mountain.  For nearly a century, it was also known as Negro Mountain as numerous runaway slaves hid within the mountain's numerous caves while escaping to their freedom in the North.

The name Mount Jefferson comes from the nearby towns of Jefferson and West Jefferson.  Jefferson was named after Thomas Jefferson and his father, Peter.  Peter Jefferson owned land in the area and also completed William Byrd II's survey of the Virginia / North Carolina Border.
The preservation of Mount Jefferson began with the Works Progress Administration in the late 1930s.  Through local donations and the efforts of numerous Ashe County citizens, enough land was preserved for the area to become a State Park in 1956.  It became a State Natural Area in 1999.
All photos taken by post author - August 2021.