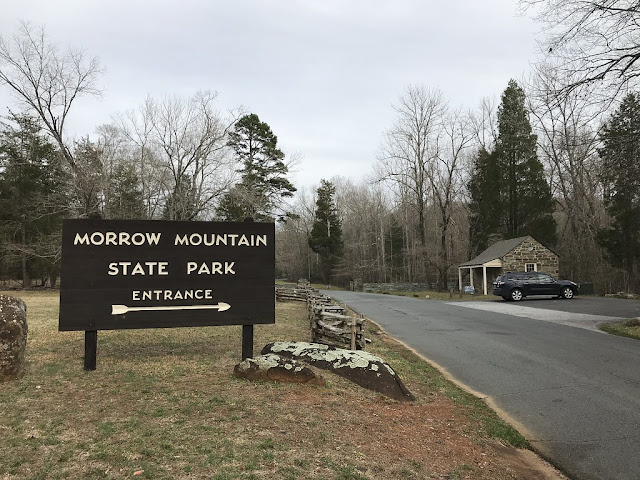 Morrow Mountain State Park is a unique mix of North Carolina's geographical and Native American history.  Geographically, the highest point within the park, Morrow Mountain, sits only 936 feet above sea level.  Yet, when they were first formed nearly 500 million years ago, many of the then volcanic mountains in the Uwharrie Range towered 20,000 feet above the sea.

Within the park and surrounding area, Native American artifacts dating from 10,000 to 12,000 years prior to European settlement of the area have been found.  The area surrounding the park were home to numerous rhyolite quarries that native tribes used to make tools and spearpoints.  These early Native Americans were considered nomads as most during the Paleo-Indian period were. (1)

Morrow Mountain State Parks offers plenty of recreation activities.  There are over 20 miles of hiking trails within the park grounds.  Camping is a very popular activities with over 100 campsites and six cabins.  The park also has a public swimming pool and with its location along the Pee Dee River - a boat launch.  Horseback riding is also popular here with numerous bridle trails.

The park was established in 1939 though work to establish the park began earlier in the decade.  The park was developed with the help of the Civil Conservation Corps and Works Progress Administration who cleared numerous trails and built many of the facilities.  Some of the CCC works can be found along the 0.6 mile Quarry Trail.  This short, yet enjoyable, loop trail goes through a former rock quarry used by the Corps for much of the stone used to build structures in the park.  The Quarry Trail is also a Kids in Parks TRACK Trail - a family program that encourages children to hike and explore the outdoors.

Another popular spot inside the park is the top of Morrow Mountain.  At 936 feet, it is the highest of the park's four mountain peaks.  It is a popular spot for picnicking and photography as the views of the area and Lake Tillery are impressive.   To reach the peak, it is a short drive from the visitor's center or  you can hike the 2.6 mile Morrow Mountain Trail.

A second trail, the Mountain Loop Trail, also is accessible here.  This 0.8 mile loop offers great views throughout and is a nice hike.
Morrow Mountain State Park is enjoyable year round and is a great day trip for outdoor enthusiasts of all ages.  It is a little over an hour's drive from much of Charlotte and Greensboro and about two hours from Raleigh.
All photos taken by post author (or author's family) - March 16, 2019.
How To Get There:
Sources & Links: