Stock Car Racing has had a significant influence on North Carolina's history and culture.  Our official state sport was born in the Southern Appalachian back county in the Virginias, Carolinas, and Georgia, stock car racing has grown in exposure and popularity over the last century.  North Carolina can easily be considered the hub of stock car racing as at one time major NASCAR races are or were held in Concord, Rockingham, and North Wilkesboro.  And up until 1971, regular circuit races were held in Hickory, Asheville, and Winston-Salem. 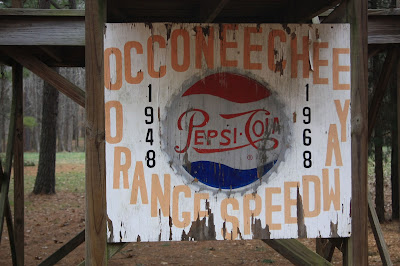 Unbeknownst to many, there is another great historic track in North Carolina.  The former Occoneechee Speedway, which sits along the banks of the Eno River just outside of Hillsborough, was a regular stop on the Grand National Circuit for 20 years (1948-1968). In fact, the Orange County Speedway is the last remaining track from the inaugural 1949 NASCAR season.

Though it's been over fifty years since the last stock car circled the nearly one mile dirt oval in competition, numerous 'spectators' still return to this track daily.  The former NASCAR track is now part of a series of hiking trails along the Eno River - and sits not that far from the Mountains-to-Sea Trail. 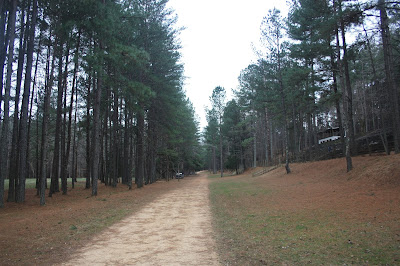 What makes this hike so unique is the number of artifacts and remnants of the old track still around.  To get to the track trail, you walk down what remains of the concrete grandstand along the front stretch.  It's not hard to imagine what it was like as a spectator over 50 years ago watching some of the early NASCAR legends like Lee Petty and Fireball Roberts race by. 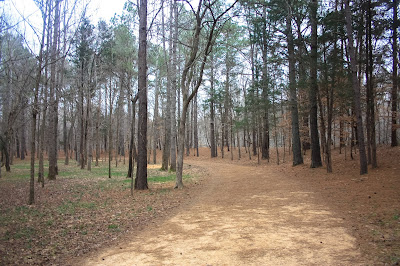 Or it is walking around some of the remaining banked curves now surrounded by towering southern pines. 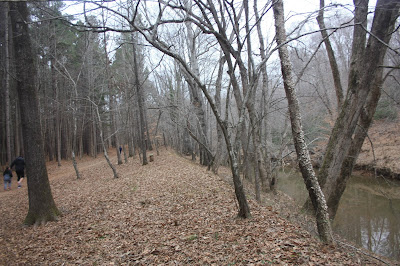 And being amazed at how close the backstretch was/is to the Eno River.  Junior Johnson once ended up in the river. (1) 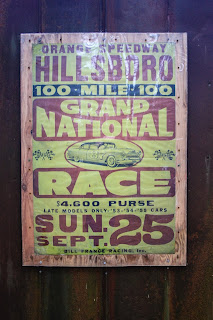 The Occoneechee Speedway started out as a half-mile horse track that was part of Occoneechee Farms.  It was a flyover by NASCAR founder Bill France, Sr. that led to a horse track to becoming one of the courses in NASCAR's inaugural 1949 season.  France bought the track and surrounding land from Julian Carr and would expand the horse oval to a 1 mile dirt track. (2)  Bob Flock won the first NASCAR sanction race in August 1949 - a 200 mile race that earned him $2,000.

Over the next twenty years, 32 NASCAR Grand National sanctioned races took place at the track.  The races were well attended with sometimes over 15,000 in attendance.  Like most NASCAR events, races were held on Sunday and in the mid-1960s area clergy would successfully petition Hillsborough and Orange County governments to outlaw stock car racing on Sunday. (3) Richard Petty, who tied for the most Grand National wins at the track with three, won the last sanctioned event at Occoneechee Speedway on September 15, 1968.

France attempted to find a home for a replacement track closer to Raleigh near Research Triangle Park, but those attempts failed.  So his International Speedway Corporation built and opened a new track in Lincoln, Alabama, Alabama International Motor Speedway, known today as Talladega Superspeedway.  The new track hosted its first NASCAR race on September 13, 1969.

After Occoneechee's final race, the track was quickly abandoned.  For nearly 30 years, the track sat abandoned falling into disrepair.  In 1997, the Classic Homes Preservation Trust bought the land surrounding the speedway.  Their intention to purchase the land was to preserve the view across the Eno River from the historic Ayr Mount plantation - a property the trust owned. (3)

Over the next ten years, the Trust learned more about the land, Speedway, its history and ties to the community.  The site was added to the National Register of Historic Sites in 2002.  Later, the Trust would begin to receive help from a group of locals called the Historic Speedway Group that continues to preserve, maintain and rebuild some of the former buildings at the track. 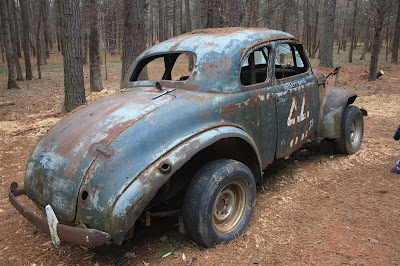 During the same time (1990s and early 2000s), NCDOT considered building a bypass that would route NC State Highway 86 to the east of Hillsborough.   The three mile bypass would have extended Elizabeth Brady Road - what is the current access point to the trail - over the Eno River and connecting to US 70 near St. Mary's Road. (4) One of the final alternatives would have bisected the Occoneechee Speedway property. (5)  Hillsborough residents, Eno River conservationists, and preservationists for the Speedway and Ayn Mount were successful in stopping the bypass from being constructed as NCDOT formally discontinued plans to build the bypass in February 2010. (4)

Today, there are numerous projects and events held at the former speedway site.  Efforts are underway to continue to restore and rebuild the grandstands, pressbox, ticket booth, infield and more.  The Historic Speedway Group intends on having a museum with many other speedway artifacts near the site.