I first visited Beaufort (pronounced BOE-furt) in 1990 on a family vacation and instantly fell in love with the coastal town.  When I moved to Eastern North Carolina in February 2000, it was the first spot that I returned to along the coast.  It is a historic and utterly charming town - combining the lure of pirates and the history of Colonial America.  It is a friendly inlet town where boats and boaters of all types and all locations stop to enjoy the boardwalk, shop, and grab a bite to eat.  Simply put, it's a great place to be.

Beaufort's history dates to the late 1600s, a town would be established in 1709 and was originally named as Fishtowne as it was known as a fishing village.  The plan for Beaufort Towne was laid out in 1713.  This 12 block area still survives today and is listed on the National Register of Historic Places.  The town was incorporated as Beaufort in 1723 as Beaufort as is named after Henry Somerset the Second Duke of Beaufort.  Somerset died in 1714.  Beaufort is North Carolina's third oldest town.

Beaufort's history with pirates is well known and very colorful.  The legendary Edward Teach or Thatch, better known as Blackbeard, once quartered here.  The 1718 shipwreck of his infamous Queen Anne's Revenge was found within the nearby Beaufort Inlet in 1996.  The North Carolina Maritime Museum, located in town, has an exhibit with numerous artifacts found within the wreckage.

Blackbeard wasn't the only pirate to find their way to Beaufort.  In the Summer of 1747, Spanish Pirates raided and captured numerous ships within the harbor.  In August of that year, the pirates would land and briefly hold the town.  Local militiamen soon organized and pushed the privateers out to sea.

Beaufort was not out of the woods yet.  In April 1782, a few months after Cornwallis' surrender of British troops at Yorktown, Beaufort was again attacked by a foreign nation.  This time the British Navy sailed up from Charleston to raid the town.  They held the town briefly before heading back to sea.

During the Civil War, Beaufort and the surrounding areas were quickly captured by Union forces.  The result was much of the town was spared during the war.  During World War II, nearby Fort Macon served as a garrison to monitor German U-Boat activity. 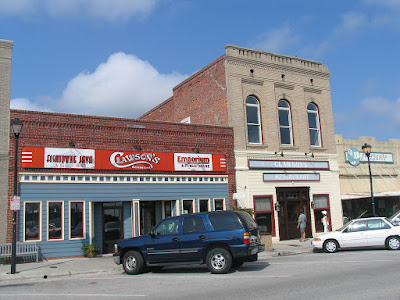 Today, Beaufort is still a small town with just over 4,000 residents.  Though fishing is not as strong of an industry as it once was,  Beaufort thrives as a popular tourist location for visitor's to North Carolina's Crystal Coast.  Along with shopping and restaurants, there are numerous inns and Bed & Breakfasts within the town.

Only minutes from Atlantic Beach and Emerald Isle, Beaufort is also a popular daytrip destination for visitor's of those beaches.  The activities and small town charm can allow for a full day away from the beach.

There are numerous day cruises - including themed Pirate cruises - numerous walking tours, ghost tours, or simply relax with a meal along the boardwalk with Carrot Island across the channel.

One of the more popular attractions in Beaufort is a cemetery.  The Old Burying Grounds dates to the town's founding and like many old cemetery's has a cast of unique characters and historical figures buried here.

The cemetery was deeded over to the town in 1731.  There are approximately 200 plots here and those that are interned hold unique stories to the town's colonial and coastal roots.

There's the grave site of Captain Otway Burns.  Burns was a hero of the War of 1812.  Over three different cruises throughout the Atlantic.  Burns captured 300 British sailors and 42 vessels.  HE would later serve in the North Carolina State House and Senate.  His grave includes one of the cannon from a British vessel he captured. 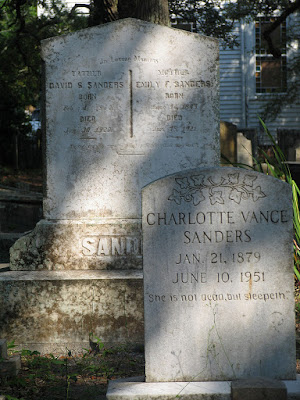 The most unique grave site within the grounds is marked with a Number 24.  Next to it reads in a grave marker carved in wood, "Little Girl Buried in Rum Keg."  The grave site is typically adorned with seashells or children's dolls or toys.  The tragic story behind this grave dates back to 18th century with a colonist family by the last name of Sloo (rhymes with snow).

The father was a prosperous merchant captain and included his daughter on a voyage to England. On the return trip to the colonies, the daughter became extremely ill and died.  The father, who had promised to his wife to return with their daughter, decided not to have her buried at sea.  With a long journey still ahead, he purchased a keg of rum - the only items on board that could somewhat preserve the body - and buried her inside.  Upon return to Beaufort, instead of exposing his heartbroken wife to viewing the body, Sloo had his daughter buried within the barrel of rum as her casket.

Beaufort is a charming small town.  A town full of history, quirkiness, and mystery.  It is a hidden gem of North Carolina's coast and one that I wish I could visit more often.