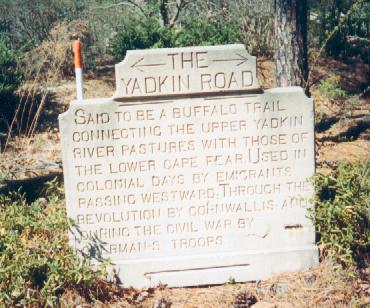 This old historical marker was found within the right-of-way of the Pinehurst Traffic Circle.  It marks the route of the old Yadkin Road that began as a buffalo trail and evolved intro a trading path that would be used by British troops during the American Revolution and Union troops during the Civil War.

There are currently four of these markers still standing in Moore County - at the aforementioned Pinehurst Traffic Circle, Page Road, the entrance to Pinewild County club on NC 211, and in Manly at the Manly Presbyterian Church.  These markers date back to 1927 and were a result of a joint effort between Rassie Wicker and Leonard Tufts.  It is not known if more markers were produced and if they were erected anywhere else besides Moore County.

It is theorized that the Yadkin Road markers were inspired by the more ornate (Daniel) Boone Trail Highway markers that were erected in the western part of the state and eventually the entire country around the same period.
Email Post
Labels: Historical Markers Moore County