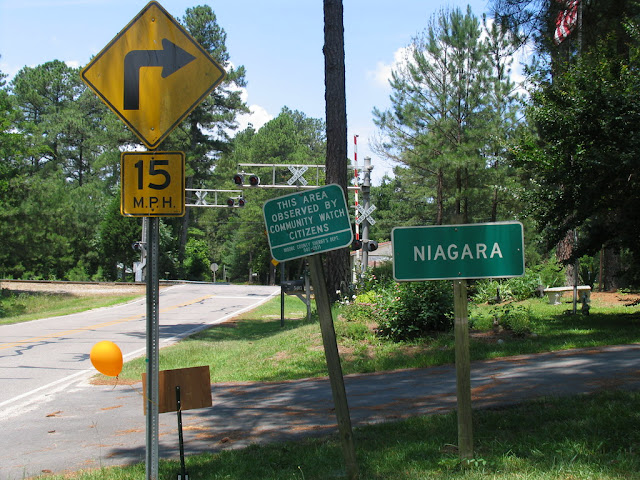 The Moore County Community of Niagara is an example of one of the many planned communities within the state created by outside or Northern developers.  In the case of Niagara, the New England and Southern Improvement Company of Boston planned to develop a 900-lot community complete with a central school, church, a hotel, parks, and a lake - to be called Lake Niagara.
The developers promoted the town at the turn of the 20th century.  They hoped to compete with other nearby communities like Pinehurst and Southern Pines. They had hoped to develop the community along with a new station along the Seaboard Railroad.  Though the community was established around 1904 - promotional materials for the community date to 1902 - the development never happened.  The only clues to the development are partially built streets including Carolina, Connecticut, and Vermont Avenues.  Virginia Road is the longest of the roads that did get built.  Parts of Columbine and Park Hill Road also remain.  Niagara was served by a post office from 1904 through 1960.
Today, the community is surrounded by golf courses and other successful developments like Whispering Pines.  Niagara was just one of the many that didn't come to fruition.
Updated: July 5, 2022 with further information on the planned development of the community.
Sources & Links:
How To Get There:
Email Post
Labels: Moore County N