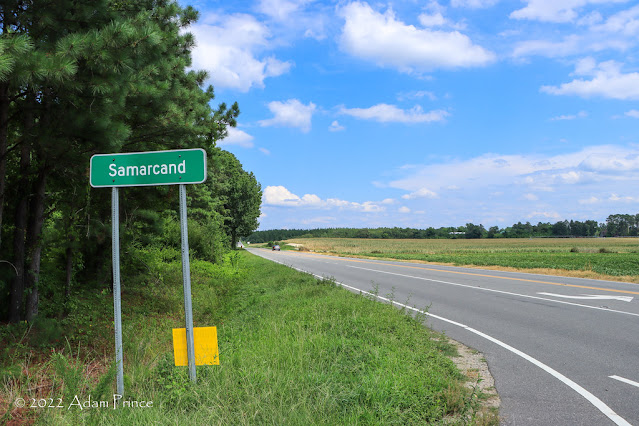 SAMARCAND - A Moore County community near Eagle Springs that Raphael W. Pumpelly, Jr. named in 1916 after visiting the Uzbekistan (then Asia Minor) city.  It can also be referenced as Samarkand.

Samarcand was home to the State Home and Industrial School for Girls, later known as Samarcand Manor.  The correctional school opened in 1918 after the North Carolina State Legislature established a "Home for Fallen Women" one year earlier.

The school was notorious for its corporal punishment, including solitary confinement, poor living conditions, and uncertainty about when and what was required for release.  Samarcand participated in the state's disgraced eugenics program.  Nearly 300 young women were sterilized at Samarcand as part of the program between 1933 and 1947.

In 1931, sixteen inmates, ages 13-18, revolted against their treatment and conditions by setting fire to two of the campus' dormitories.  The young women believed this would allow them to go home versus staying at the facility.  All 16 would be charged with first-degree arson and face the death penalty.  The women were defended by a Raleigh columnist and lawyer - Nell Battle Lewis.  In a highly publicized trial, the first-degree arson charges were dropped, sparing the defendants of the death penalty.

Twelve of the sixteen received sentences between 18 months and five years, two others received suspended sentences, and another two saw the charges against them dropped.

Samarcand would not evade public scrutiny after the arson trial.  Audits in 1934 and 1940 detailed the harsh punishments and living conditions including "mattresses on the floor with no beds, and a single washbasin and toilet for thirty girls."  A 1973 inspection which included Governor James Holshouser prompted further changes.

In 1974, the facility transferred to the control of the North Carolina Department of Health and Human Services.  In addition, the facility's name changed to Samarcand Manor and became a co-educational institution.  Samarcand returned to an all-girls facility in 2002 until its closing in 2011.  Today, the 430-acre grounds are home to the Samarcand Training Facility for various law enforcement officers.

Amazon Bookstore:
How To Get There:
Bookstore link takes you to sites Amazon's Associates page.  A small portion of any purchase goes to the Carolina Crossroads site.
Email Post
Labels: Moore County S