I personally find old bridges fascinating, and one of my favorite things to photograph.  Unfortunately in North Carolina, a good old bridge is getting more difficult to find.   Along US 176 in Henderson County between Hendersonville and Saluda, there is a great old bridge that still stands and is worth the visit.
Built in 1927, the High Bridge is one of a few remaining open-spandrel concrete arch bridge left standing in the state.  The three arch, 580 foot long bridge spans over 130 feet above the Green River.  Hence the name, "High Bridge".  When the bridge opened to traffic, it was the highest of its kind east of the Mississippi River.
The narrow - only 20 foot wide - bridge carried traffic until 2001 when a modern bridge was built immediately to the north.  NCDOT had planned to demolish the old bridge at a cost of $240,000; however, Henderson County Commissioners lobbied NCDOT to preserve the bridge for pedestrian and bicycle use.  NCDOT then used the demolition funds to make minor repairs to exposed steel, improve drainage and add pedestrian protective fencing.
Local leaders had envisioned local garden clubs utilizing the bridge as a tourist attraction, unfortunately that never happened.  Nearly 20 years later, the bridge is a popular spot for photography but also graffiti now covers the road surface of the old bridge. 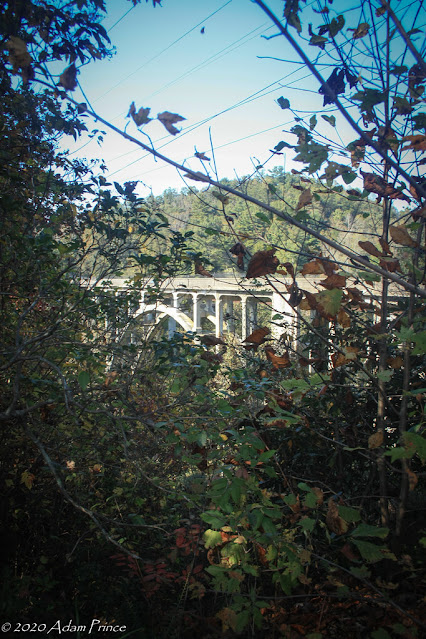 The bridge is in fair shape to walk across and take photos.  From either side of the bridge there are various well-trodden paths created by visitors that wanted to take a closer look from different angles.  On the west side of the bridge, there is an off-road vehicle path that leads to a few trodden paths that allow for some decent views of the bridge.
All photos taken by post author - October 15, 2020.
Sources & Links:
How To Get There:
Email Post
Labels: bridges Henderson County