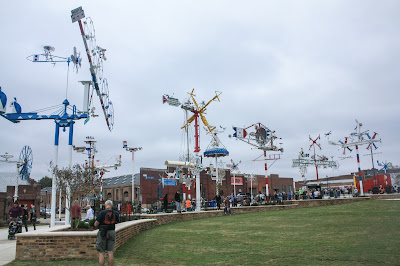 I am sure a number of you when reading this feature are asking, what's a whirligig.  Think of a very decorative windmill. Now put nearly 30 of these creations in one park - and you get one of North Carolina's newest attractions, the Vollis Simpson Whirligig Park in Wilson. 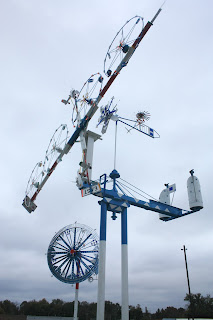 Considered a great American folk artist, Vollis Simpson's story is not one of a typical artist.  Born in 1919, Simpson was a World War II veteran who didn't start building the beloved structures until after his retirement in the 1980s.  Simpson ran a machine shop in Lucama and near and during his retirement would run to local salvage yards for cast off items that he could use for his creations.  Simpson did nearly all the work himself erecting the sometimes over 50 foot whirligig's at his Lucama farm. 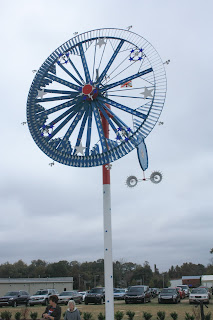 His work would start off as a local attraction.  Local residents would go out to see the whirligigs especially in the evening and at night where the reflected light off car headlights earned his display the nickname, "Acid Park."

Simpson's work would soon become more than a local attraction.  Travelers and those just that were just plain curious would venture off of Interstate 95 and US 301 onto Wilson County backroads just to see the display.  His work became so well-known that he was commissioned to do pieces for the American Visionary Art Museum in Baltimore, the 1996 Atlanta Summer Olympics (his work can still be seen on the I-75 Courtland Street overpass), and also in Albuquerque, Manhattan and Raleigh.  In 2013, the North Carolina General Assembly declared whirligig's as the official folk art for the State of North Carolina.

As Simpson grew older, there was a movement to preserve his numerous structures.  By 2010, many of his whirligigs were starting to show age and disrepair, as Simpson, now into his 90s, was unable to maintain them.  That same year, the City of Wilson, announced its plan to create the Vollis Simpson Whirligig Park in their downtown.  Simpson was able to sell his creations to the city's non-profit group responsible for the park where they would begin the long process of carefully restoring each creation. Simpson would pass away at the age of 94 in 2013, but not before he could provide guidance on the restoration of each piece.

For Wilson and Wilson County, the Vollis Simpson Whirligig Park is a symbol of great civic pride.  The two acre park is located on Goldsboro Street in Downtown Wilson.  30 of Mr. Simpson's whirligigs are proudly on display here.  The park officially opened on November 2, 2017.  The park is envisioned to be a central community gathering point for the city.  Surrounded by the restored whirligigs, the park is home to a covered stage and large grassy area for concerts and other events and a covered pavilion for farmers market and other similar type events.  A museum and visitor's center are also planned. 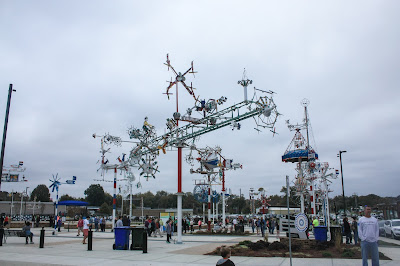 The first weekend of every November since 2005, Wilson has been home to the North Carolina Whirligig Festival.  This two-day festival not only celebrates Simpson's work but also folk artists throughout Eastern North Carolina.  Over 30,000 visitors come to Wilson for this event that has three stages for entertainment, numerous locally made crafts, amazing food and more.  With the addition of the new park, the festival is set to grow even more in the coming years.

My family had a great time at this festival.  We were able to play at the new park and look up in amazement at all of the restored whirligigs.  The level of detail and the uniqueness of each one is simply amazing.  There are activities for all ages - my oldest son loved the chance to make his own whirligig out of Legos.  If it gets a little to crowded for your family - or if your kids are getting a little over rambunctious - Wilson's Imagination Station sits along the festival and offers a discounted rate during the festival.  It's a quieter and easier way to let your kids run around. 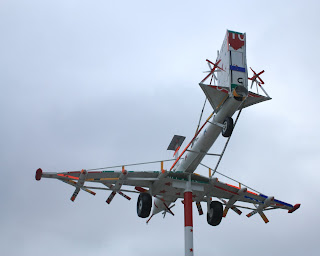