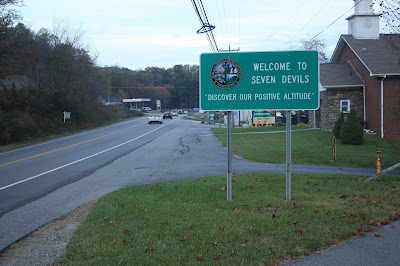 Watauga County Community named in 1965 and incorporated in 1979.  Seven Devils is a resort community.

The founders of the community wanted a unique name to attract tourists.  According to the town's website, the name seems to have come from Native Americans who said that the wind blowing across the mountains during the winter would sound like seven devils screaming at the night.

However, others contend that the town was named as a result of the seven rocky peaks along the mountain range and of seven brothers of the Winters family that were known to be "as mean as the devil."
Email Post
Labels: S Watauga County
Location: Seven Devils, NC 28604, USA