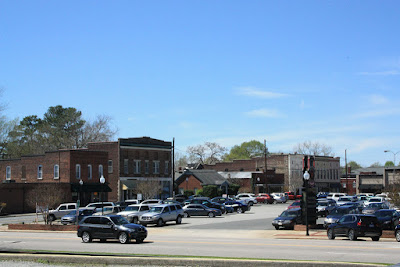 Like many North Carolina towns that formed in the mid to late 1800s, Spencer is a railroad town.  In the late 1890s, the Southern Railway Corporation was looking for a new site to build a large maintenance and repair facility.  The Spencer Shops - named after Southern Railway's President Samuel Spencer - would be constructed in 1896.  The shops location was about halfway between Atlanta and Washington, DC.  The new facility would attract numerous workers to Rowan County and the town of Spencer would quickly develop across from the Spencer Shops.


Incorporated in 1905 - the town of Spencer is named after Samuel Spencer.  Anchored by the Spencer Shops, which would go on to employ nearly 3000 people, the town quickly grew to nearly 2000 residents by 1910.  The rail yard would be the town's heart and soul for decades.  When the diesel locomotive overtook the steam engine, the Spencer Shops role within the Southern Railway system would diminish until it would cease operation in the 1960s.  With the exception of the freight yard, the Spencer Shops would sit empty for nearly two decades.  In 1977 and 1979, the Southern Railway donated the land and buildings within the Spencer Shops ground to the State of North Carolina.  The site of the former Spencer Shops would eventually become the North Carolina Transportation Museum - opening in 1983.

The North Carolina Transportation Museum is Spencer's largest tourist attraction.  Every year, over 100,000 visitors explore the grounds and exhibits and take in a train ride or two.  In addition, the museum is the home to and has preserved many former steam and diesel locomotives, automobiles, and airplanes. Today, the town of Spencer proudly embraces its rail heritage and partners with the NC Transportation Museum for numerous festivals and events.